In 2021, the Cosmopolitan was purchased by MGM Resorts International for a reported $1.65 billion. As one of the top resorts in Las Vegas, if not the world, it was crucial that the look of the hotel from the moment a guest arrived be as breathtaking as possible. A key part of creating that look was a complex digital signage network in front of and throughout the hotel, including an 8-column, four-sided installation in the lobby comprised of multiple 42-inch high-resolution LCD displays arranged in portrait mode, as well as a row of similar screens in landscape mode mounted behind the reception desk. Also included were multiple LED displays outside the resort entrance. 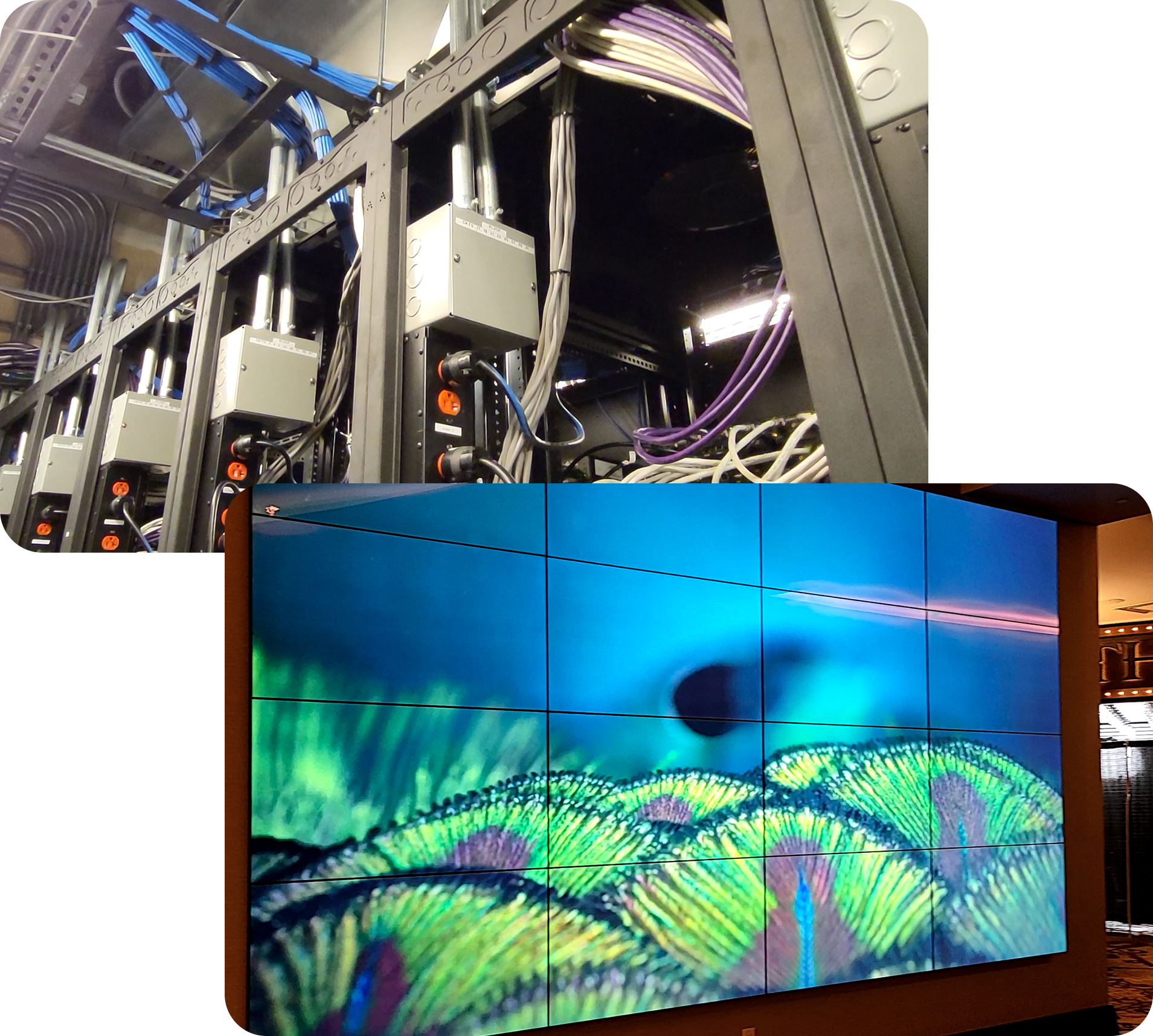 As part of an effort to maintain its position as a premier Las Vegas resort, the Cosmopolitan was seeking to upgrade its hotel digital signage technology. When it came to high-profile guests or convention groups, for example, the hotel wanted to greet them with company branding, digital art, and informational content on the lobby displays.

Unfortunately, this was not possible with the Cosmopolitan’s existing digital signage systems. Various signage networks throughout the property used different systems, requiring operators to switch between as many as 7 programs to update content. The existing digital signage content management platform required users to go through a long training process to use the different platforms, and converting content to a file format involved a rendering process that took several days.

Once the content was finally converted, the CMS was extremely difficult to use, adding to the costs and complexities of the network. As a result, it was nearly impossible for the hotel to keep content new, fresh, alive, current and constantly moving.

The Cosmopolitan also wanted to allow some of the screens to be controlled by third parties. The resort is home to several nightclubs, so they wanted to allow those third parties to swap out generic content and display something tailored along the lines of “Hey, Let’s Jam!” as well as play live videos or streams for special events. At the same time, they didn’t want the various parties to be able to control all the screens.

To help it implement a modern, flexible and easy-to-use digital signage network and content management system, the Cosmopolitan of Las Vegas tapped U.K.-based Acquire Digital. Recognized as an industry leader in self-service, digital signage and wayfinding software, Acquire has installed thousands of digital deployments over its 25-year history for hundreds of customers around the world. Many of those deployments include digital signage solutions for hotels and resorts as well as casino digital signage.

One of the first steps in the process was to replace the existing digital signage media players with Acquire’s own player technology. Unlike a traditional media player that just plays digital content on a playlist or sequence, Acquire’s technology incorporates advanced functionality including the ability to perform tasks including playing multiple videos on a single display, placing a transition layer on top of existing content, moving content around, rotating it and colorizing it across all the different displays. Content can be placed in virtual “cubes” and rotated across the displays.

Acquire’s hotel digital signage solutions can also pull in content such as web pages, other videos or live streams and overlay that on top of existing content. Additionally, incorporating an additional media player allows for separate content to be displayed on a portion of the same screen independently, but frame accurate.

If a deployer has video walls or LED displays in unusual shapes, the Acquire system can fill those shapes with content and play multiple outputs. The system can also process 4K output and even decode 8K if required. 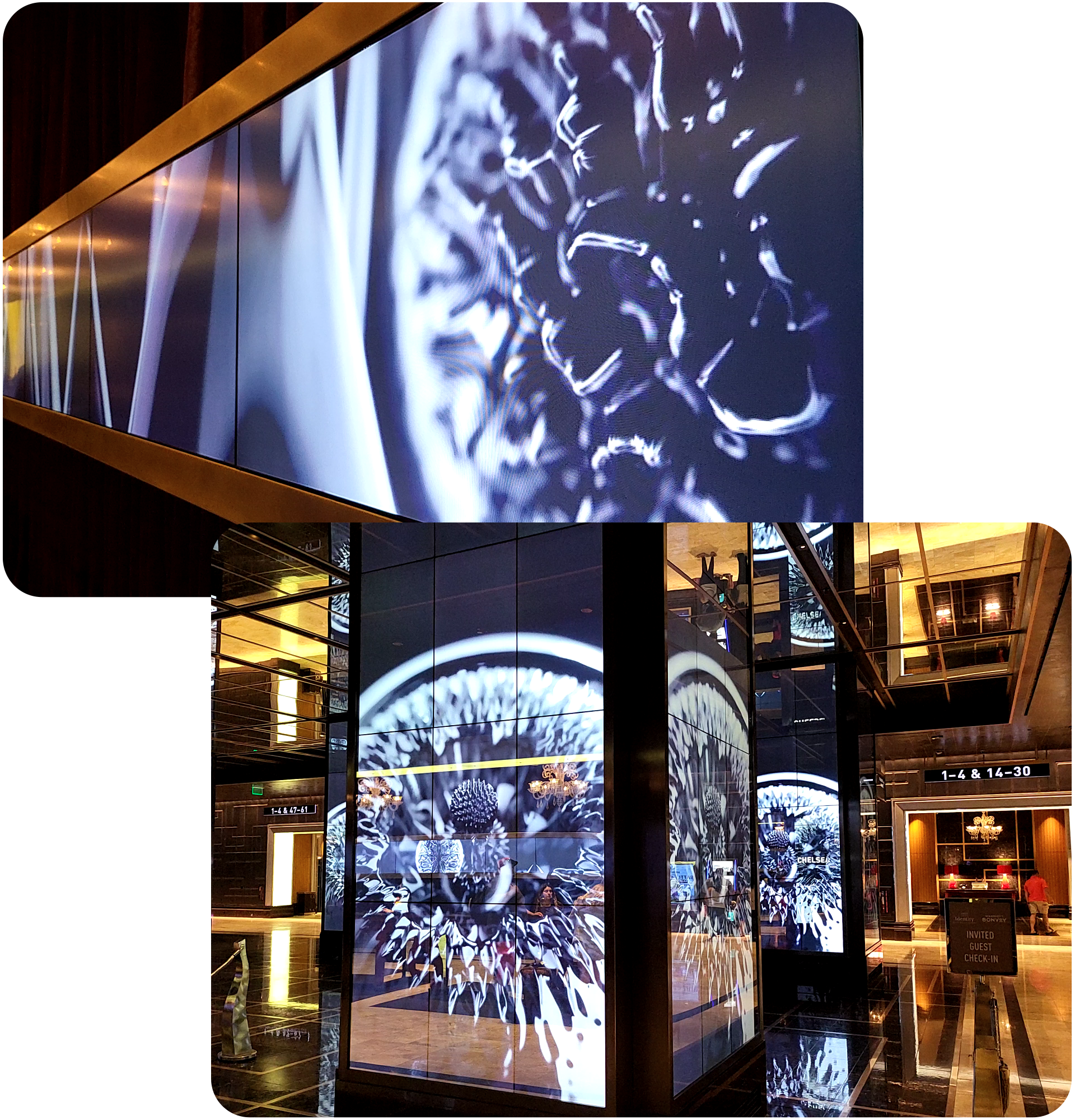 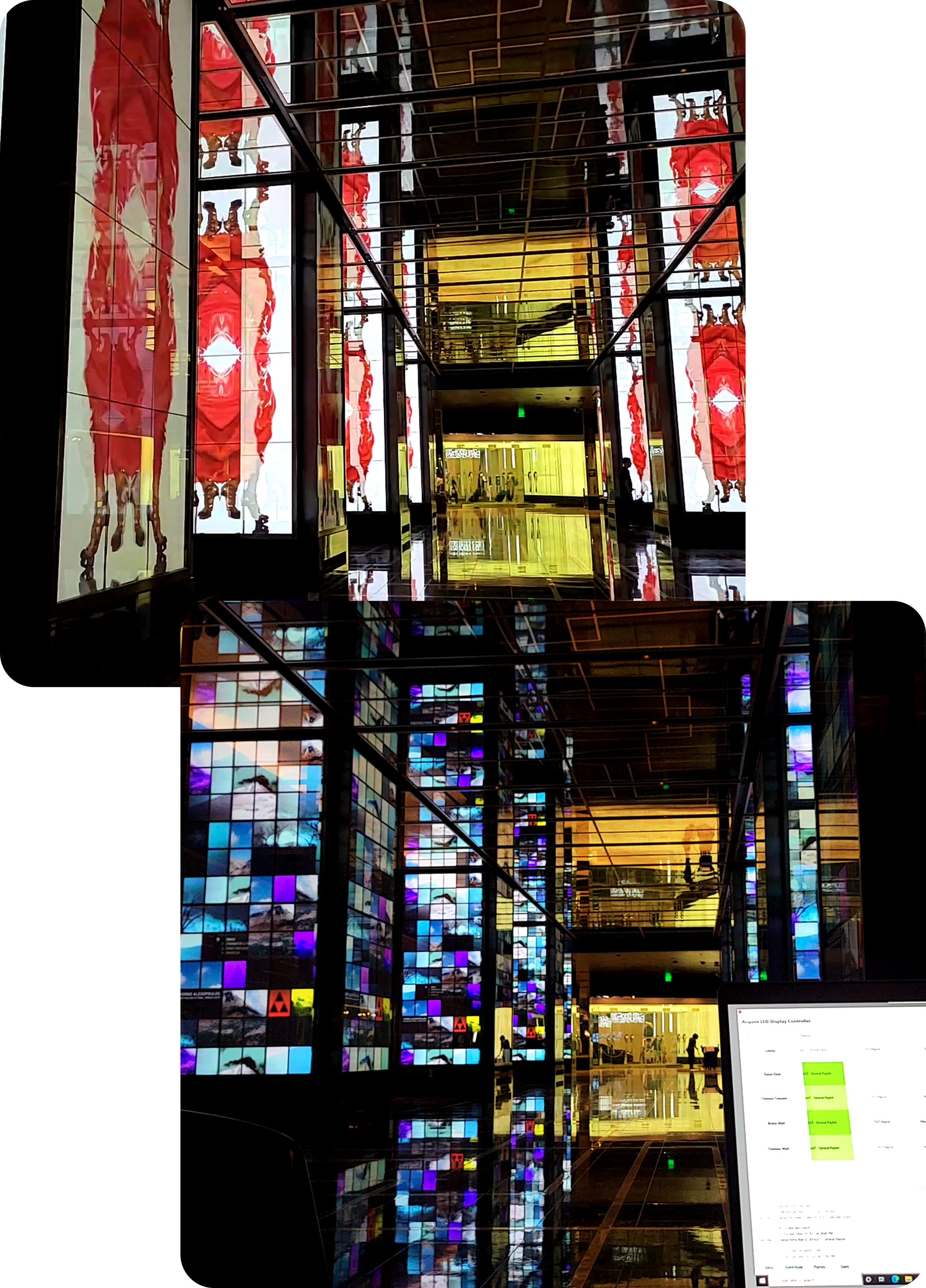 Acquire’s work at the Cosmopolitan was completed in May 2022.

One of the main benefits the Cosmopolitan was able to achieve thanks to its partnership with Acquire came in the cost to operate the various digital signage systems. Before commissioning Acquire, the hotel was operating a player per screen plus backup players, totaling nearly 70 players. Thanks to its state-of-the-art digital signage software for hotels and vast industry experience Acquire was able to reduce the number of players required by more than half. Additionally, the Cosmopolitan can now output more than four 4K videos at the same time from a single player. And if one player goes down, then there is always a backup player that will take its place to avoid downtime.

All of this can be controlled from a single dashboard via the Acquire Editor CMS and monitored from the Acquire offices as part of Acquire’s ongoing support and maintenance program. Managing content is accomplished using a simple drag and drop interface that already exists in Acquire’s standard user interface but is customized in parts for The Cosmopolitan. Users can learn how to use the system in minutes and update content in real time. Because different types of content have been designed for different sizes of screens, the software includes a failsafe that won’t allow the wrong content to be dragged and dropped onto a screen that doesn’t match the content size, avoiding embarrassing video playouts.

If any of the media players experience a fault, the Cosmopolitan can quickly swap it out with a manual stream. The resort also benefits from having YESCO staffers based in Las Vegas who are fully trained using the systems, providing local on-premise support if needed. Acquire also has its own remote support tools that alert the company to any issues, potentially even before the Cosmopolitan would know there’s a problem. Acquire also provided full training to the Cosmopolitan’s IT department, allowing them to manage most issues in-house. Thanks to those safeguards the likelihood of real problems is very low.

Acquire’s expertise combined with the efforts of YESCO’s technical team, the Cosmopolitan’s external creative company and the creative and technical teams at the resort ensured the project all came together smoothly. Because of their efforts, every guest will have an outstanding visual experience no matter where on the property they may be.

Ready to get started?

See how Acquire can help with your digital initiatives. 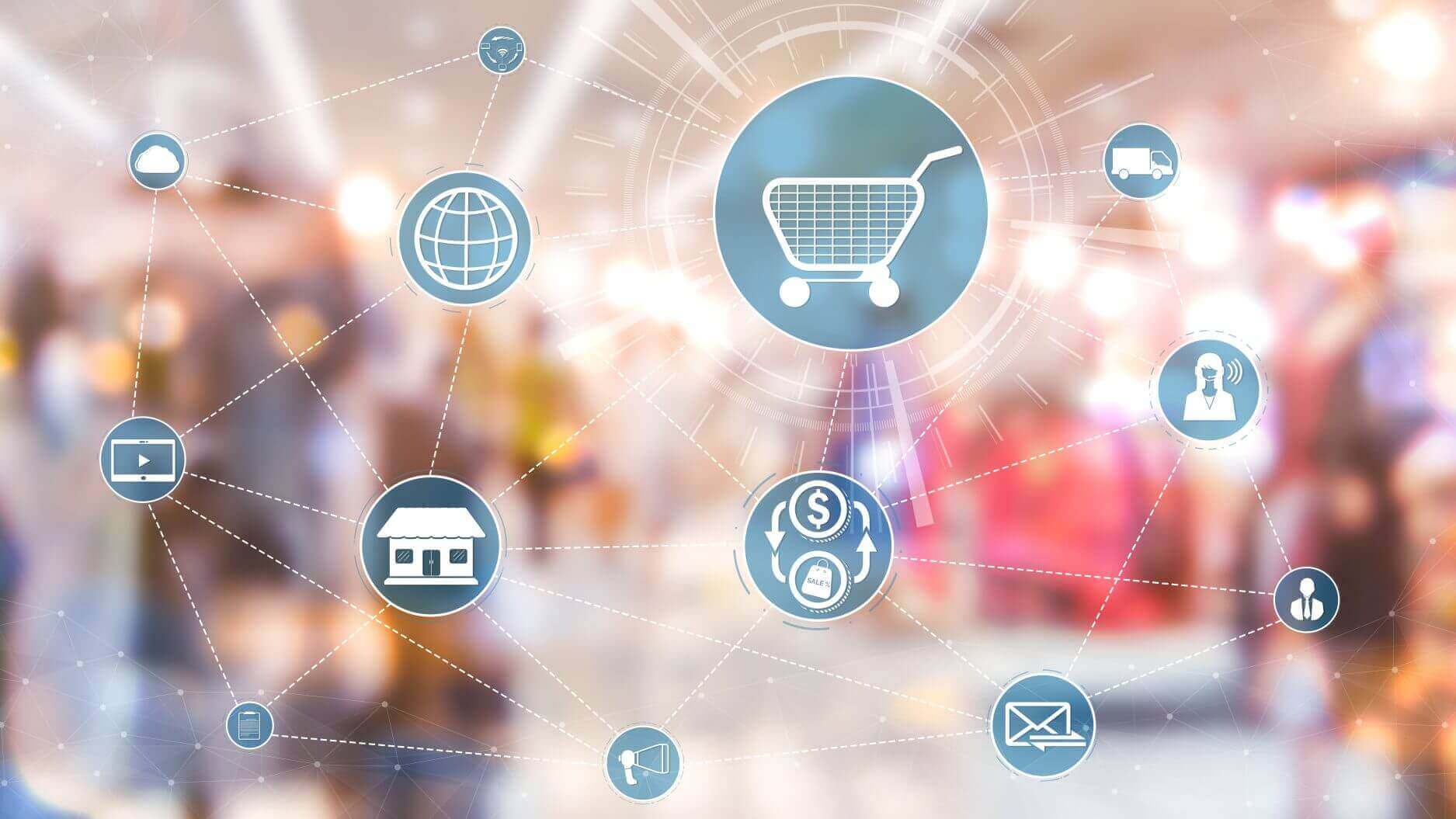 How should mall properties use digital maps within their website, mobile experience, and on-promise kiosks.

Acquire Digital releases its most powerful digital Wayfinder yet. 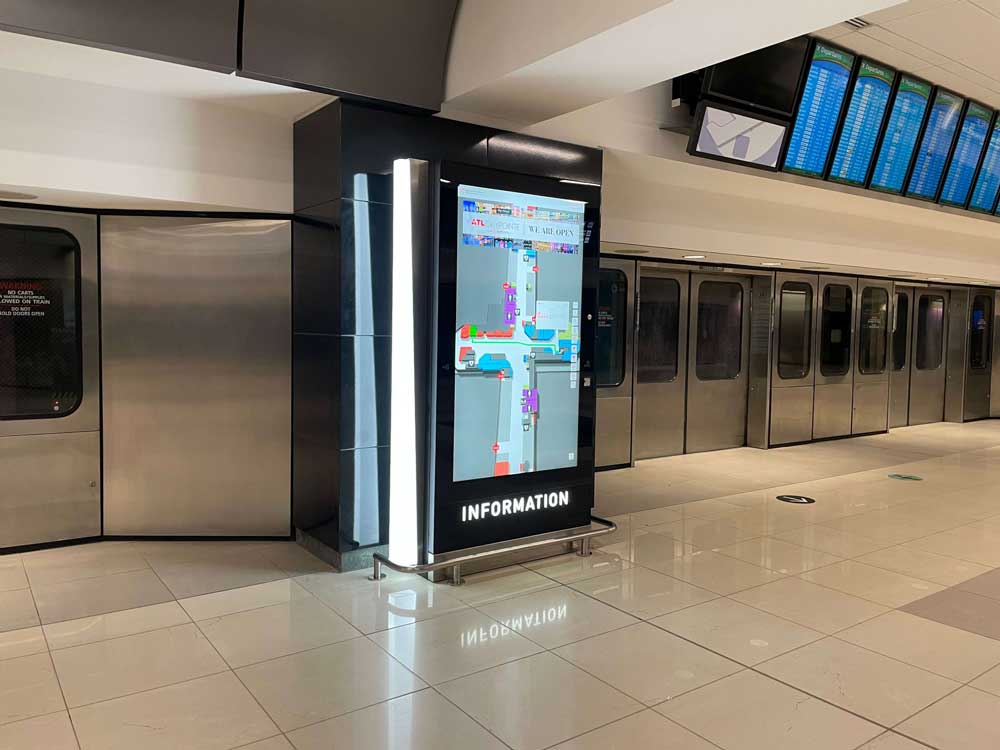 Acquire's diverse team of digital signage experts is here to help for all your digital requirements. Reach out today to see how we can help design a solution that works for you.